Today we see the smug face of Bob Blackman MP who is, apparently, rejoicing in the fact that  Cameron is forwarding with the ridiculous plans for Plain Packing (PP), yet there are a considerable number of sensible Tory MPs who object..... and they onject on the most sensible of grounds too! let's go via Bob 'blackheart' Blackman first shall we:-


" I must declare a personal interest here: both my parents died prematurely from smoking related disease." Well diddley-boo 'Blackheart', find me a family in this country that hasn't been touched by cancer in the past 50 years? The only difference in the past 7 years is that ASH, CRUK et al (not to mention the entire medical world at large), have used every possible illness that could possibly be linked to smoking a cigarette has been linked..... to smoking a cigarette - even gout! My second observation is that obviously the 'honourable Blackheart' was fully aware of both his parents time to depart this world and can, therefore, categorically prove that they died "prematurely" as they obviously departed before that mythical date! And no doubt it clearly stated on their death certificates that causation WAS smoking related?


"Smoking is still by far the most common cause of premature death in our country, and indeed across the world. It seems to me entirely proper, therefore, that it should be a matter of concern to our Government, and indeed to everyone who believes that one of the duties of governments is to protect the public from threats to their health and wellbeing."

How is smoking causing premature death when we are all different? By 'different' I simply mean that some are born to smoke and some not-and, some are born to lead a long life and some a very short life and, unfortunately, some are born to plague smokers to death when in actual fact, those that choose to smoke are simply allowing their freedom of choice to be displayed-bit like choosing beans over tomato's with your 'full english' in the mornings! And again, did we have all those deaths recorded as premature simply because all those people did actually have a fully dated lifespan recorded somewhere, thus had the audacity to precede that allotted lifespan-or is it just another simple generalisation from those in the medical profession who choose to play on our fears? I rather suspect the latter myself for I've searched my entire carcasse and cannot find an "out of date" sign, mark, stamp or anything else to indicate my d.o.d so I can only assume that if I live to 110 I will still have died PREMATURELY!
As for the second part of old 'blackhearts' anaalogy, then I suggest that he  wages war with Camoron on the subject of motor vehicular emission; aka, exhaust fumes! Note here folks that as smoking rates have decreased over the past 55 years, industrialisation rocketed, causing much pollution to fill our skies.

Cancer caused by diesel fumes-read on Bobby boy!
Now, some 50 years AFTER this industrial explosion, the WHO have merrily declared that the very air we breathe is of a cancerous nature yet also declare that SHS is HARMLESS! So, Mr 'Blackheart', when are you waging war on the air that we breathe & motorisation I ask?


" This Government has already rightly implemented reforms to try to stop young people from starting to smoke..... "

But what use are they I ask? Just as many people smoke now as did pre-ban and why is that? The answer is simple Mr 'Blackheart', the people have grown used to the lies, the frauds, the manipulated statistics & the junk science surrounding this entire anti-tobacco campaign and basically have more important matters to concern themselves over-like existing from week to week:
..... like being able to pay the rent:
.......... like being disabled but scorned by ATOS;
...............like having a spare room and being taxed on it:
.................... like actually having no home at all!.
What people cannot comprehend is the fact that government are taking the carving knife to our beloved

yet are happy to WASTE £1/2billion every single month on this futile ban programme. I say futile because it is futile for if people want to smoke then 'By God Sir' they will smoke!
Our MP Bob 'Blackheart' furthers himself into the mire with this next bit:-


"It is of course absolutely right that, as Conservatives, we demand good evidence (can we see it then please?) before we resort to legislation. We should only use the law to prevent harm when we can be confident that the harm is serious, and that the proposed remedy is likely to work. (The trouble being that we already know that it won't!)
For that very reason, the Government appointed Sir Cyril Chantler, an eminent paediatrician, to review the public health case for standardised packaging. His excellent (substitute 'dubious' please)  report is available here, and I would urge anyone with an interest in this subject to read it. It is a model of how a review of this kind should be conducted. He concludes that:

“the body of evidence shows that standardised packaging, in conjunction with the current tobacco control regime, "is very likely to" lead to a modest but important reduction over time on the uptake and prevalence of smoking and thus have a positive impact on public health”.

Now we all know that Chantler was simply sent over there to find 'some sort of evidence' but what he actually found was ..... NONE..... excepting the fact that illegal tobacco sales had grown considerably and shopkeepers were moaning about losing sales. In other words, PP in Australia was a complete failure-especially as the Aussie Treasury lost money too. Note the important use of words here --> is very likely to...!  Not exactly heart warming or emphatically good news for Camoron to act upon was it! Rather the opposite I think!
Anyway, enough of old 'Blackheart' and his idiotic ramblings, most of which should be consigned to the bin-there are far more important matters at hand.
And now to the cusp of the matter, the thing that is really going to rock any governments boat (and many of them are already on rather choppy water). 'PP' WILL, WITHOUT DOUBT, be the best bonus ball that those who trade in such could hope for-and I for one applaud them for their aplomb in openly admitting that they will make an absolute fortune if/when PP is introduced into this country. I will tell you here and now, and quite brazenly too, that if I need any tobacco products of any sort in the future (with PP having been enacted) I will be straight down the road to my local  'man in van' with my wedge! Why on earth would I want to pay this government a shedload of tobacco tax when they are trying to suppress peoples freedom of choice?
Not only do we have the police stating the obvious, that illegal sales will rocket, but we have erudite politicians voicing exactly the same thing! But will Camoron listen?
Perhaps if he includes the SUN newspaper in his morning break we might find him spluttering coffee all over No10 when he reads this gem! It basically tells of an Indonesian entrepreneur who make lots & lots of money by making/selling cigarettes-and fair play to him for that I say. Good friend Chris Snowdon has written quite nicely on the subject and it shows the complete ludicrousness of PP and all that it stands for.
I mean to say, we have a crooked EU parliament/government that is trying its damnedest to get our money (by hook or by crook), we are already giving away £1/2billion per month on this ridiculous anti-smoking campaign and we are now considering sacrificing more of our hard earned pennies by employing PP - you really could not make this up, it's just a recipe for financial disaster! We keep allowing immigrants into this country when it is already abundantly clear that we don't have the jobs to support them, and now we are considering passing a law that will make non-immigrants so rich that they wouldn't want to come here - how crazy is that? This is probably why the party known as UKIP are picking up votes here, there & everywhere for they have a leader who relies on common sense; ie, if people want to smoke let them smoke, it is their freedom of choice. People are sick to death of all this nannying 'BS' and 'Blackhearts' latest publication on "Conservative Home" which merely tells us that he is against smoking/smokers, doesn't give two hoots about our economy and certainly is not impressed by us (the people) having a freedom of choice! Here's what it's all about Bob -----> 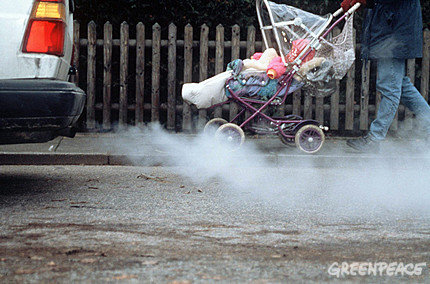 3 months old and I'm already dying! Breathe it in baby breathe it in.
Now let me finish with some actual truths Mr Blackman:
My wife's family have lost 9 members to various cancers. None of them smoked though one did take up smoking after being diagnosed as terminally ill ("let's see what it all about" he said). Non of them drank, being a little religious and very 'home security' conscious (mortgage & bills etc) and they ranged from between the ages of 34 -96. The only surviving member smoked for 50 years and only recently retired from that noble art because he "couldn't be bothered anymore".
Now if none of those 9 people smoked why did they all contract some form of cancer Mr Blackman?
As we deliberate this matter, far more important matters are taking place a mere 40 miles away in newark where my good friend & libertarian Roger Helmer 'doth do battle' for the honour of being the first elected UKIP MP. Now the Tories have a solid 16,000 majority in Newark but I don't see this as a matter of UKIP usurping the incumbents but more of a challenge of 'how big a slice of that 16,000 will they get'? We already know that Camoron is a worried men after the EU election results (and well he might be) but what has occurred here is unprecedented! He has ordered his 'Cabinet' to sally forth to Newark and do some proper work, pounding the pavements and campaigning. Wowee, I certainly don't remember, certainly not in my time on earth (not sure when I'm leaving it yet-need to ask Mr Blackheart esq!) an order of this magnitude prior to a run of the mill by-election so there's a fair indication that Camoron is sh*****g his Tory panties at the possibility of an ex tory (Roger) taking a considered safe seat from the Tories. And so he should be for Roger is very mild of manner, a terrific speaker & a very intelligent person who values freedoms just as I do, you do and a whole host of others do!

Where UKIP have carefully put a seasoned, well spoken and remarkably intelligent man into 'bat', the Tories have fielded yet another cardboard cut-out in the shape of Mr Robert Jenrick who seems to have a property portfolio of some £5m yet has never run his own business and actually works for Christie's-the auction people! So we have a man who has done business all over the world up against a pip-squeak with no business whatsoever-this will be interesting! Personally, much as I would love to see Roger Helmer take the seat, I think that reducing the Tory majority by 10,000 will be a stupendous feat. Good luck tomorrow guys & girls.