Not a smiling Easter Bunny!

Smoking bans KILL businesses-FACT!
It seems that one MSP member of the Scottish parliament has decided that it is time to forward his own career as Health Minister by forcing a law through which prohibits smoking on any hospital grounds north of the border. Now this is simply spiteful as this law, if successful, will alienate all smoking patients, all smoking staff, and probably be highly detrimental to the mental welfare of patients as smoking visitors will refrain from visiting sick relatives. This is a move of sheer bastardness on Mr Neil's behalf.

(Another 'grinning jackernapes')
Again, this man uses the 'necessity to be smoke free' as a poor excuse for exercising his power as Health Minister when in reality he is just joining in with the bullyboy state by becoming a bullyboy himself-perhaps he's brown-nosing, as Donaldson did! The interesting concept is just how they (the hospitals) are supposed to police this 'law in the making' and also the possible costs of that policing! I have written to this despot but have been warned that 'responses are not really his game'!

'Ninewells Hospital'-large area to police!
As Alex Neil spouts on about preventable deaths I wonder if he noticed another article this week which clearly states that "Suicide is the biggest annual killer amongst men". The Campaign Against Living Miserably claims the public are hardly aware that “suicide is the single biggest killer of young men in the UK.” probably because the majority of the public are so bloody miserable at all the sanctions being imposed that they wouldn't even dream of such an organisation being allowed to exist! It would seem that one of the biggest catalysts is unemployment-buck your ideas up Camoron, how many more thousands are simply waiting for the day to arrive so as to invafe and bolster our dole queues?  Without doubt, this country is becoming one of the most miserable, soul-less places to be in and I am absolutely amazed that inhalation of our very polluted air, when facing the east, has not become a 'beheadable offence' as yet!

Watch this video for a bit of entertainment! And, the video is ably backed up by this report!
Of course we expect the Scottish parliament to be just as devious & underhand as our own shambolic Plain Packaging experience turned out to be for it seems that no matter what solid reasoning is put forward against these measures, the anti tobacco mobsters will brook no interference! In America however, things are a little different at the moment as 'PP' has been booted out!

Interesting events ahead and I do wonder at the compassion in some of these people-though in all honesty, people like Alex Neil show absolutely none!
It seems that the hospital's desired policy is being ignored in Eire as well as the  Bosses at Dublin's Beaumont Hospital have admitted that smoking on the campus is still widespread, nine months after it declared that it was becoming a smoke-free facility. and why should it not be? It is an open air space after all. I have written to the head honcho in Dublin as well, asking exactly what his problem is with people exercising their freedom of choice? No response as yet.
We don't need to worry about smoking a nice relaxing fag with our coffee anymore as now, apparently, caffeine is about to usurp nicotine as: 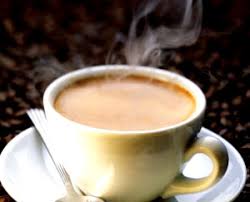 Caffeine is so dangerous and is being consumed in such high quantities that it should now be regulated, a leading expert claims. Dr Jack James says that the stimulant is causing ‘untimely deaths’ and that its 'lethality' is being underestimated.

Well, sorry to say folks, but this may well be my last blog as I drink at least 10 (yes-TEN) cups/mugs of coffee per day as I struggle to cope with this prohibition crazy country we now live in. I do rather hope though, that all this caffeine causes death by heart attack as, apart from conking out in my sleep, a massive heart attack would be my favoured way to expire! In fact, thinking about it, only highly inconsiderate people would deem to die otherwise, as then they would be incurring costs upon our poor & battered NHS!
A booming question arises now folks:


As his family confronts the shock of another, more advanced malignancy today, however, the Ottawa Canada) management consultant is agonizingly aware that many cancers remain incurable, despite 40 years of hugely expensive research into the disease and how to treat it. “This thing called a war on cancer … has been an utter failure with metastatic cancers,” estimates Mr. Bradford, 70, author of a book about his own experiences as a patient.

People run, walk, climb, cycle, swim, horse-ride, play musical instruments, sing, dance and all sorts of other things as we are told that we are winning this war on cancer, but we are not and nobody mentions that research costs have surged well past the $100-billion mark; and that's only Canada! America (?) even more $. Cancer is in all of us, learning how to stop it getting started would be a far better idea in my book/having plenty of measures in place to help cancer sufferers cope would be even better.
The latest 'wheeze' to exhort people to stop smoking is a "smokers boot camp" - I kid you not folks! It's getting more like  Japanese workforce regime everyday!

Apparently, if you still smoke after following all their rules you get your money back-so you've got nothing to lose, you can have a nice little 'Borstal style' holiday for free!
Apparently it has been decided that smokers are still employable, which I must say is most magnaimous of employers in this day and age of the masses of unemployed! And whilst still in America (the "Land of the Free" - yeah, righty ho then!) the largest Atlantic City casino has declared smoking to be in favour again as bankruptcy looms. You see folks, smokers keep pubs going, clubs going, betting offices going and even casino's going. You simply cannot argue against the figures! Carry on banning everything everywhere Scotland and you'll soon be offering the begging bowl to anyone with a few pennies. Look around at the pubs & clubs that closed in Britain this month.
MANILA, Philippines—Health advocates on Tuesday slammed the decision of the Sangguniang Panlalawigan (Provincial Board) of Cavite to scrap the smoking ban in Tagaytay City.Tourism counts for a lot in these far off places, smoking bans don't enhance tourism!
Anyone who wants to hear the truth only has to listen to the Goerlitz Tapes courtesy of friend Chris Snowdon. Health is not the object, massive financial gain IS! 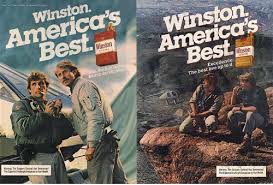 Finally, and I like to save the best until last, Bulgaria is still up in arms about their smoking ban which is causing financial havoc to an already financially beleagured country, virtually controlled by their own brand of the Mafia. My good friend xxxxxxxxxx has just returned from Sofia but had already sent me this note:

You would think that the Bulgarian authorities have far more serious issues to deal with than enforcing the smoking ban, which became total last summer. In February when people’s electricity bills started hitting doormats, there was shock and anger at the unbelievably high charges. People took to the streets in major cities across the country in the hundreds of thousands, demanding something to be done. Four people set themselves alight in protest and lost their lives as a result. The government resigned in early March with a caretaker one in charge until elections in May. Many Bulgarians are totally fed up with all the political parties and the corruption that has beset the country in the decades since the fall of communism. Imposing a total smoking ban may seem like a small issue in comparison but it’s caused widespread anger and I saw smokers in several places are openly defying it. Enjoying a cigarette with a coffee or beer has been a popular activity since way back and taking that pleasure away, especially in these austere and troubled times, seems like yet another thump on the nose for ordinary people and for businesses. Bars, cafes and restaurants are all suffering anyway because of economic troubles and if people can no longer smoke when they go out to socialize, they stay home instead especially during the very cold winter months. In some small villages, the local pubs have closed down, cutting off a life-long for older people who can’t get around much and who live relatively isolated lives. Even in the cities businesses are folding with the smoking ban seen as the final straw for many. Before the total ban, there was a policy of having glass screens to separate smoking from non-smoking areas, as is the policy in Austria. It was felt that this was a good compromise and ventilation was also improved. Businesses spent money on these arrangements but then it was all change again when the total ban was introduced. For some of the smaller businesses, this was too much. They may have survived the summer but once the bitter winter winds hit, customers stayed home.  Sound familiar?
There will be a plea to the new government after May to rethink this total ban in order to give businesses some much- needed help and to keep social venues open. We will have to see if they take any notice! 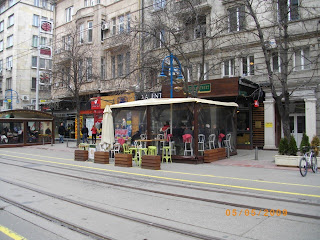 Neatly surrounded by a fine plastic mesh which affords a degree of seclusion and also ample aeration for those non smokers that might worry about smokers asphyxiating. There's more chance of the exhaust pollution asphyxiating the non smokers outside! Why are we subjected to conditions vastly inferior than a pig is allowed to endure?
The answer is simple my friends, our politicians were totally conned/ruled by the lunatics from the anti tobacco asylum-this must change as you can easily see from this picture, taken in the "Vitosha Boulevard", one of the main streets in Sofia. Plenty of spaces for any 'harmful' smoke to dissipate and plenty of people willing to spend money in the city centre! Think on politicians, think on.

(Looking increasingly like the Real Deal)
There's not a lot for an Easter Bunny to smile about when you look at the financial chaos surrounding us all and then look at all the lunatics running the various asylums!
Posted by handymanphil at 11:21